Over a century and a half before Marion Barnett, Sr. incorporated Barnett Angus Farm, the Barnett family’s mark had been imprinted upon Georgia’s agricultural heritage. From Virginia through North Carolina they came, Revolutionary War patriots seeking out the new lands of frontier Georgia. And in Wilkes County, Georgia, they would remain, cultivating the fertile soil, innovating and entrepreneurial, true stewards of a beloved land.

Samuel Barnett was Georgia Agriculture Commissioner in the years just after the Civil War as the state rebuilt from the ravages of rebellion. His son, Edward, held a passion for the land equal to his devotion to public service as mayor of Washington and wise counselor. Edward’s son, Marion, graduated from Georgia Tech, served as an officer in World War I, then used his business creativity to find decisive ways to transcend the South’s boll weevil devastation to develop a new farming model for success.

In 1947, his bold venture to create a cattle farm from a portion of the family’s substantial land holdings became a reality. But this was not just any cattle for his operation. These were finely bred and purposed Black Angus, the best stock on the best land available, and the best management to hold it all together. Angus cattle had less difficulty calving and a high fertility rate. With keen intellect and perception, Marion Barnett, Sr., was a pioneer in this business. It was a goal he faced with unwavering determination.

His son, Marion Hill Barnett, Jr., had grown up in the town of Washington, in a home begun in the first decade of the 19th century and now declared a National Historic Landmark. He was barely a teenager when his father began the Angus operation. He recalled, “Although I grew up in town, I still had farm chores.” After high school, he attended the University of Georgia, graduating in 1955 with a degree in animal science, though the experience he gained working with his father far outweighed anything he acquired from textbooks. 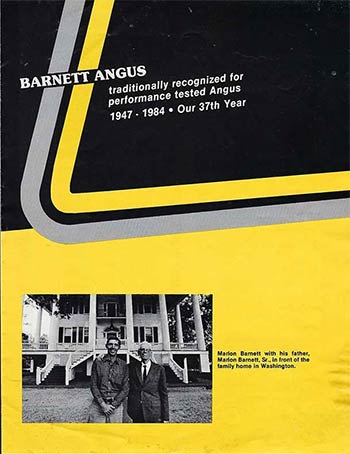 He also had a love of aviation and of country which led to his service as an Air Force pilot from 1956 to 1962, with a brief stint in Vietnam. He retired as a Major in the U.S. Air Force Reserves and Georgia Air National Guard. For many years he maintained a four-passenger Cessna at the Washington-Wilkes Airport, only a mile away from the traditional-style brick home he shared with wife Vivian and their three children, Lucy, Mamie, and Wilkes. When Wilkes was ten, his father flew him on a nostalgic trip to Moultrie’s Sunbelt Exposition which was held on the site of Moody Field where Marion learned to fly.

Marion Barnett, Jr.’s formula for successful cattle breeding was “a good bull, a good cow herd, good management, and good marketing skills.” Although always striving to do better, the Barnetts clearly have spent decades doing things right. In 1980 they produced the Top Performing Angus bull ever tested in the state.

At the University of Georgia Extension Service Gain Test Station at Tifton, the bull produced by the Barnetts gained an average of 4.54 pounds per day for 140 days for a yearly gain of 1178 pounds. “No other bull in 22 years had ever had this kind of record, Barnett stated. The animals were also tested for such things as structural soundness and ability to withstand stress.

Setting records was nothing new for the Barnett Sr.-Jr. team. In the decade of the 1970s, they had more top performing bulls at the Tifton station than any other breeder. This was accomplished by having a good eye for cattle, saving the right stock, and breeding carefully.

In 1978 the Georgia Cattlemen’s Association and the Georgia Beef Cattle Improvement Association presented the Purebred Cattleman of the Year award to the Barnett Angus Farm.

The Barnetts’ methodology uses a combination of natural breeding and artificial insemination (AI). Marion Barnett, Jr. added that the advantages of the latter included uniformity in offspring and “more mileage out of a bull. It’s difficult to spend too much money on a good bull because in final analysis it’s the wisest choice.” 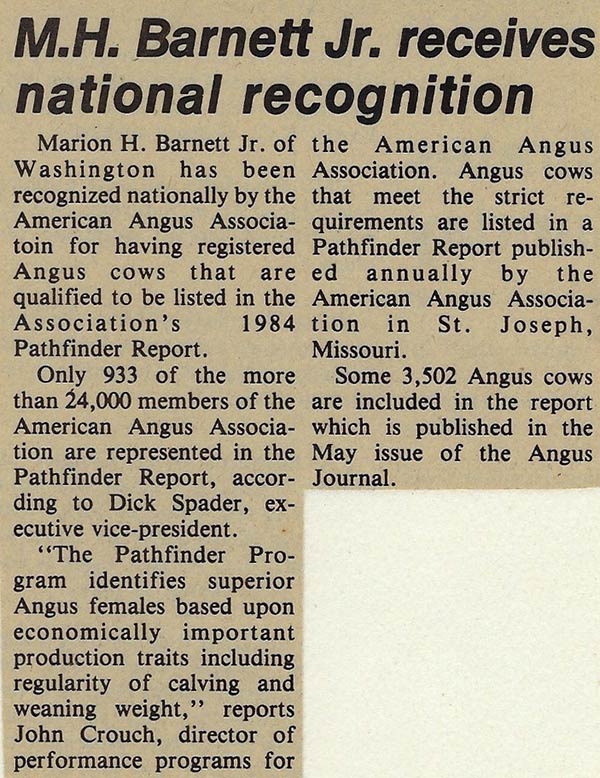 Beef cattle production is known as a low employment industry. By the 1980s the senior Barnett assisted mostly with the detailed record-keeping for each bull, cow, and calf on the farm’s 1100 acres. Barnett, Jr., ran the farm with two workers, a couple of pickup trucks, and three tractors. The trusted longtime herdsman was Harold Goldman. Being a beef cattle farmer was a 24/7 job.

The Barnetts were also active in the Georgia Cattleman’s Association. Marion, Sr., was a former president of the group and Marion, Jr., had been a director. Interested in policies and developments on the national level as well, he was a delegate to the National Angus Association’s annual meetings and supported its endeavors.

The elder Barnett, by 1980, had sold his share of the Angus Farm partnership to his son but continued to manage his land and timber interests well past his ninetieth birthday.

Marion Barnett, Jr., reflected straightforwardly, “We’ve got land and cattle and that’s all. I’ve got everything anybody needs.”

On August 17, 1989, Marion Hill Barnett, Sr., passed away at the grand age of 98. The strength and stability of Barnett Angus Farm remains a testament to his vision and diligence. Earlier that year, he had become the first inductee into the Wilkes County Cattleman’s Association Hall of Fame. Marion Barnett, Jr., would join his father in the Hall of Fame in 2014, becoming the only second-generation inductee on this elite list.

One of the oldest farming operations of its type in Georgia, Barnett Angus Farm was recognized in 2007 with the Historic Angus Herd Award for its fifty years as a continuous producer of registered Angus cattle.

At age seven in 1979, Wilkes Wingfield Barnett, son of Vivian and Marion Barnett, Jr., was the youngest entrant in Wilkes County’s 25th annual Steer and Heifer Show. A new generation of the family had now stepped upon the stage. Following high school, he would graduate from the University of Georgia in 1995. Of course, he had grown up on the family land working on the farm and sharing the same passion for cattle as his father and grandfather. Owner and operator of Barnett Contracting he has traveled the country on various engineering projects while never losing sight of the centrality of Angus production in the overall plan.

By 2013, Wilkes became more heavily involved in the management of Barnett Angus Farm. Since his father’s death on April 24, 2016, he has begun applying his own vision and devotion to the cattle operation paying homage to those who laid the groundwork before him. In 2017 his childhood friend, Chris Goldman, son of Marion Barnett, Jr.’s herdsman Harold, was named herdsman himself. It has been a strong bond.

To the original Main Farm on the north side of Highway 78 just west of Washington had been added the VFB Farm opposite to the south. Beginning in 2011 adjacent timberland began to be acquired. Known as the Lucy Ranch, much land improvement and clearing has been and continues to be done. Owning his own grading company has made this task much more manageable. In 2016 Wilkes Barnett purchased the Wilkins Farm from the University of Georgia. Now called the Max Ranch, it is just over the line in Oglethorpe County, quite convenient to the earlier operations. With 865 acres (700 of open land) this ranch has allowed for bull development on the north side and recipient cattle, commercial calf weaning, and corn silage to be done to the south. This now provides over 4000 acres of pasture and timberland for Barnett Angus. Future expansion and improvements are planned with a goal of a 900 head cow herd. This size will fully utilize the current land assets.

Through the decades Barnett Angus bulls have consistently performed well in tests and sales. Recently they have been top sellers at the Ocala Bull Sales with 90% of the Barnett bulls sold in the Florida market. Because of that state’s hot and humid climate, only the hardiest of bulls make it in that environment. The Barnett bulls are the most sought after and successful. They are sold as two-year-olds, insuring that they are developed and ready for heavy use. To meet the needs of today’s cattlemen, Barnett Angus now sells cattle developed primarily on forage. Grazing on forage has now replaced the feeding of large amounts of grain. The grain is now used only as a supplement for bull development with the bulls on large pastures to promote good feet and legs, helping a good product continues to become even better.

This same philosophy is adhered to with the physical facilities. Continuous steel fencing now surrounds the concentration area where bulls are working and loading as well as a new barn at the Main Farm. With much of the AI and embryo transfer work done at the VFB Farm, a new facility and corral has been constructed there. New hay barns and equipment sheds are recent additions along with enhanced fencing to protect investment and insure proper provisioning.

Throughout all the adaptation, modernization, and constant assessments, there is an unshakable consistent: family. Wilkes Barnett credits his mother, Vivian, with being the binding force. Her advice, her focus, and, yes, her good meals around the dinner table keep him responsive to the place and heritage of this business. Friend and herdsman, Chris Goldman, stands by his side as advisor. Amber, the mother of Wilkes’ son Maximus, is the registrar for bulls and cows. Daughter Lucy, son Maximus, and Amber’s children, Memphis and Branson, bring another generation of continuity to this family operation.

Marion Hill Barnett, Sr., Marion Hill Barnett, Jr., Wilkes Wingfield Barnett, the earliest Barnett settlers of Washington and Wilkes County, all have made their contributions to cherish this land and its bounty, to provide the best it can offer. The legacy of Barnett Angus Ranches lives and grows.

Ken Sobol, writing in the New York Times way back on June 4, 1972, said: “From the start Washington was a rich, cultured, graceful settlement, favored by the gods of antebellum architecture and commerce.” In Sobol’s opinion the town was still like that. It has survived “the Civil War, the boll weevil, the crash and the New South entrepreneurs with hardly a ripple in the slow, smooth tide of life.” That is Wilkes Barnett’s Washington. 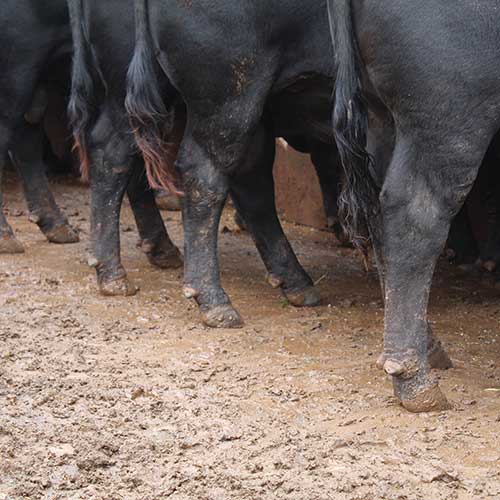 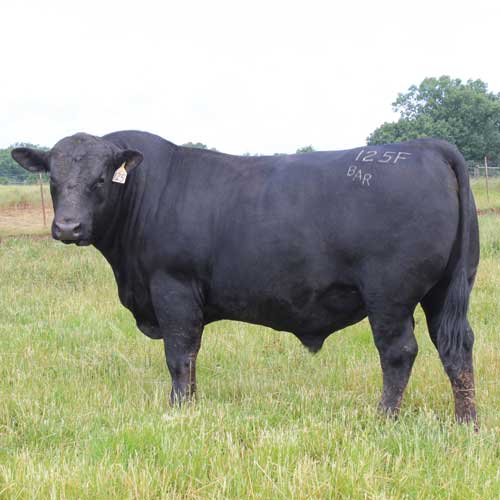 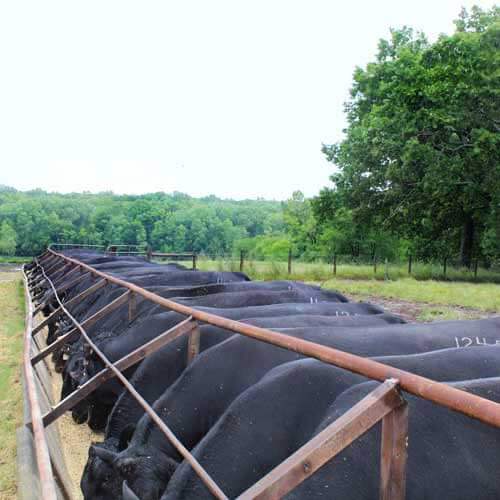